Cable television (CATV) is a television distribution system that uses a network of cables to deliver multiple video, data, and audio channels. This article explains the functions, technologies they use, and how it is combining with Internet TV to provide advanced advertising and tCommerce.

Cable television (CATV) is a broadcast distribution system that uses a network of cables to deliver multiple types of media services. In the United
States, companies (such as CATV) that provide programs over multiple
transmission channels are called multichannel video programming distributors (MVPDs).


While CATV systems might use coaxial cables for a majority of customer
connections, many CATV systems also use fiber optic cables and microwave
transmission connections to transfer some of their signals.


Figure 1.1 shows a sample CATV system. This diagram shows that the
CATV system gathers content from a variety of sources including network
feeds, stored media, communication links and live studio sources. The headend converts the media sources into a form that can be managed and dis 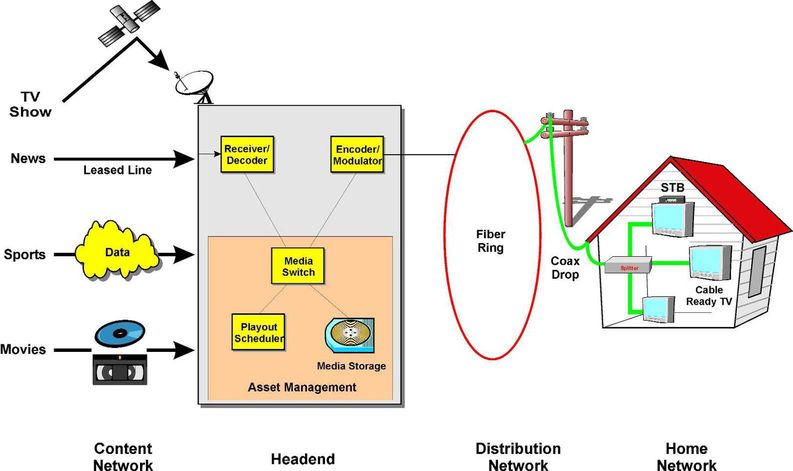 
tributed. The asset management system stores, moves and sends out (playout) the media at scheduled times. The distribution system simultaneously
transfers multiple channels to users who are connected to the CATV system.
Users view CATV programming on televisions that are directly connected to
the cable line (cable ready TVs) or through adapter boxes (set top boxes).